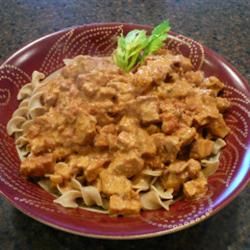 Pörkölt is a Hungarian meat stew in a red sauce based on powdered paprika and onion. It is made in Hungary and throughout Central Europe, and served with pasta, small dumplings or boiled potatoes. The powdered paprika both gives the stew both flavour and colours it red. There is a great deal o. Pörkölt or porkolt is another typical, authentic Hungarian stew, which is also very common in Romania, especially in Transylvania. Another dish I have been eating all my life, although my grandmother never actually called it porkolt, she would call it “tocana de porc” – pork stew or even goulash.

Despite not being well known internationally, pork porkolt or pörkölt (sometimes referred to as pork goulash) is one of the most popular dishes in Hungarian cuisine. The original version of this Hungarian Pork Pörkölt recipe has won the Reader’s Choice Award in Food Network Hungary recipe contest. Thank you for your votes! Pörkölt is Hungary's national stew, its name derived from the word pörkölni, meaning to roast or singe. The stew is made from meat such as beef, lamb, pork, or chicken, simmered in a red sauce with lots of onions, garlic, and paprika powder.